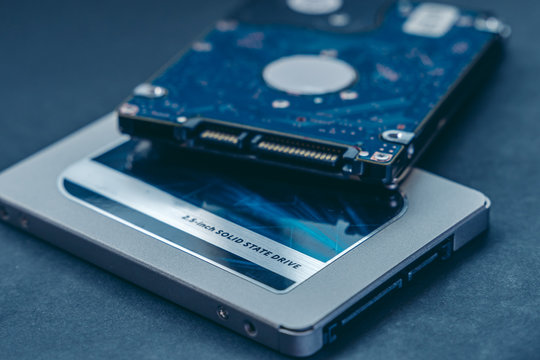 Short Answer: Embedded MultiMediaCard (eMMC) and solid-state drive (SSD) storage share many similarities, including the use of NAND flash memory. SSDs, however, offer superior performance and are available in larger sizes for bulk storage. We recommend SSDs over eMMC storage if you’re not looking for a budget PC.

What is eMMC storage?

Storage using MultiMediaCard (MMC) was the precursor to Secure Digital (SD) storage. There are multiple versions of MMC, but you’re most likely to find its embedded version (eMMC).

Mobile phones and some of the best cheap laptops use eMMC storage. “Embedded” refers to the fact that the storage is usually soldered directly to the device’s motherboard. NAND flash memory – found in USB thumb drives, SD cards, and solid-state drives (SSDs) – makes up eMMC storage, which doesn’t require power to retain information.

As eMMC storage is cost-effective, it is ideal for budget PCs. It’s also found in premium devices such as the Surface Go 2.

How fast is eMMC storage?

The current eMMC storage standard is v5.1A, which can deliver transfer speeds of up to 400MB/s. SATA SSDs will also top out around that speed.

A device’s performance isn’t just determined by the overall transfer rate. As eMMC storage operates with fewer memory gates than SSDs, it can deliver the same speed, but not the same volume.

You can move more cars at a time if there are more lanes on the road. SSDs are multi-lane highways, while eMMCs have a single lane each way. There is no difference in speed between the two, but the on-ramp to the highway won’t be nearly as slow.

Some of the best SSDs are able to reach read speeds of 3,500MB/s on the PCIe 3.0 standard, while the latest PCIe 4.0 standard nearly doubles that speed. While write speeds are slower in both cases, they are still much, much faster than eMMC storage. For more information, read our review of the XPG Gammix S70 PCIe 4 SSD.

How big does eMMC storage get?

If you’ve been shopping for a budget laptop or tablet, you’ve probably noticed that many offer either 32GB or 64GB of storage. In addition to these sizes, you can also find 128GB and 256GB eMMC storage. eMMC storage works best with small files (lanes on the road won’t jam up as easily), so if you’re often working with large files, you’ll need an SSD.

There are SSDs available in much larger capacities, ranging from 128GB all the way up to multiple terabytes. Aside from being considerably more expensive, they are also more difficult to find. You’ll no doubt end up paying for cloud storage fees if you choose an eMMC drive. There is no reason to use 32GB and 64GB anymore; if cloud storage will come out around the price of an SSD, then you might just be tempted to pay more up front.

After purchasing a PC, you can also upgrade it. As eMMC storage is embedded, you won’t need to replace anything, whereas many laptops (not all) have an M.2 slot. By choosing a smaller SSD, you save money at checkout. If you wait for a sale on your preferred storage, you can expand storage at your leisure.

Should you avoid eMMC storage?

A cheaper, smaller eMMC storage device isn’t necessarily a bad thing. With devices like Microsoft’s Surface Laptop Go, there’s definitely a market for it. In terms of durability, you’re more likely to see a display or touchpad fail before eMMC storage fails.

Your budget and how you plan to use your device will determine whether or not you should avoid eMMC storage. EMMC storage should be sufficient for browsing the internet and watching some streaming media on a tablet or affordable notebook. Before making a final decision, make sure you check reviews for speed benchmarks of eMMC storage.

You’ll no doubt Benefit from an SSD if you plan to use a laptop for gaming or productivity. As with eMMC storage, not all SSDs are the same, and there is plenty of slow hardware on the market. Ensure you’re getting a drive with the speed you need by reading reviews and checking benchmarks. In our collection of the best SSDs, you’ll find a lot of great choices.
HDDs are also an option, especially for large files, but SSDs are generally more reliable.

How To Install and Run Android Apps on Windows 11